Short articles on African Art and tips for enthusiasts 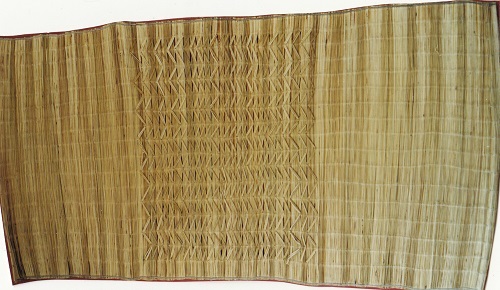 Woven grass mats are a rather obscure traditional craft. This is the subtle, the quiet and the normally overlooked, beauty.

In rural areas many domestic items are still made from different types of grass. For example: baskets, belts, spoon holders, beer strainers, and mats, to name a few. Here I deal with three items: mats, which are modern (made by most groups in Southern Africa), and later in the text, Mats used in conjunction with dispensing food and spoon holders, from the 1950s and 60’s made by the Zulu people.

The above mat has been proportioned into thirds. The central area is visually dynamic and the grass has been angled creating a zigzag pattern of strands (almost like the textile version of a floating weft). This humble item reveals individual commentary by an unknown craftsman on a commercially made product and the result is a restrained thing of beauty.

Traditionally these mats (icansi) are rolled out on the floor and used to sleep, or sit on during the day. The dimension determines the function. Photographic documentation from the early 20th century, shows that larger versions of the grass mat was also placed vertically in the ground and used as a barrier or shelter against the wind.

Mats are generally plain in South Africa, but those that are more elaborate, serve another function: They are given as gifts on the occasion of engagement.

In Swaziland, they are more decorative and a technique has developed since 2000, where sweet papers are wrapped around each grass stalk at intervals, in bands across the mat, imparting a vibrant glittery appeal, becoming in a sense, a grass textile.

Grass, a renewable resource, is cut in May and cyperus marginatus or immensus is the most commonly used grass in the mat making process. Today, mats are made on a short upright loom called the mbongolo or donkey, that I believe was introduced by Malawi immigrants in the 1960s to the lowveld area. Before the use of the loom, mats were stitched by collecting multiple grass strands and placing them on the lap, in front of the crafters, who sat on the floor and stitched the grass together to form a mat.

Sometimes alternate bands of dyed stalks create a subtle stripy effect. In the case of the above example, inset rectangles of crosshatched grass are visually balanced either side by areas left plain.

These mats are not woven using conventional methods of warp and weft but rather are made by securing and binding each grass strand at regular intervals to the preceding one using rows of a type of double stitch. These stitches appear on the mat as linear rows forming an integral part of the surface design. Today the cotton /nylon strands used for binding the grass together are held in notches on top of the donkey frame and the threads are weighted using stones, wood, cotton reels or found objects during manufacture.

The frequency and repetition of the cord binding on the mat and the tension of it, determines the eventual longevity and strength of the final product.

The same technique was used for this mat made in the 1960s, by Zulu women, then decoratively stitched with wool. 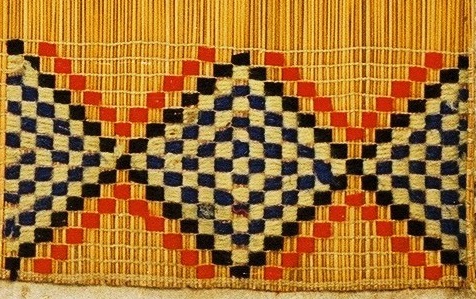 Grass, wool and cotton place mat decorated in the style of the time, by Zulu women.

However, the one below was made with a dense weave and dyed grass was used to create the geometric designs.

These rectangular shaped spoon holders called isimpontshi were made by Zulu people, in Kwa-Zulu Natal.  The grass is of a much finer quality than those used for sleeping mats and is tightly woven. Spoon holders are only large enough to encase one personalized spoon as each member of the adult household possesses one for eating milk curds. Isimpontshi can be beautifully decorated with beads, the patterns and styles reflecting the area of origin, as can be seen in the above examples.

TIPS: The age and area of origin of these collectable items can be discerned by noting the type, colour, design and size of beads used to decorate them and the type of thread used to stitch them on the surface.

One thought on “WOVEN GRASS IN SOUTHERN AFRICA: Three examples”